Plasma fibronectin (pFn) has long been suspected to be involved in hemostasis; however, direct evidence has been lacking. Here, we demonstrated that pFn is vital to control bleeding in fibrinogen-deficient mice and in WT mice given anticoagulants. At the site of vessel injury, pFn was rapidly deposited and initiated hemostasis, even before platelet accumulation, which is considered the first wave of hemostasis. This pFn deposition was independent of fibrinogen, von Willebrand factor, β3 integrin, and platelets. Confocal and scanning electron microscopy revealed pFn integration into fibrin, which increased fibrin fiber diameter and enhanced the mechanical strength of clots, as determined by thromboelastography. Interestingly, pFn promoted platelet aggregation when linked with fibrin but inhibited this process when fibrin was absent. Therefore, pFn may gradually switch from supporting hemostasis to inhibiting thrombosis and vessel occlusion following the fibrin gradient that decreases farther from the injured endothelium. Our data indicate that pFn is a supportive factor in hemostasis, which is vital under both genetic and therapeutic conditions of coagulation deficiency. By interacting with fibrin and platelet β3 integrin, pFn plays a self-limiting regulatory role in thrombosis, suggesting pFn transfusion may be a potential therapy for bleeding disorders, particularly in association with anticoagulant therapy. 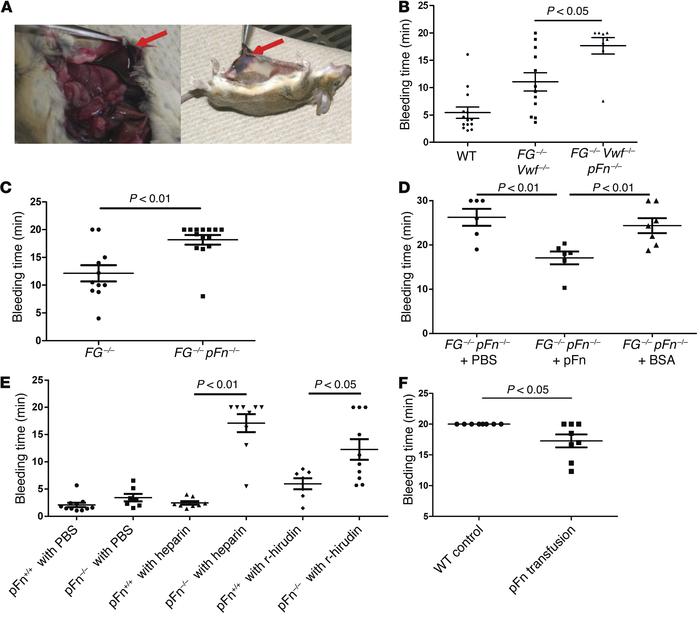