The regulation of neutrophil lifespan by induction of apoptosis is critical for maintaining an effective host response and preventing excessive inflammation. The hypoxia-inducible factor (HIF) oxygen-sensing pathway has a major effect on the susceptibility of neutrophils to apoptosis, with a marked delay in cell death observed under hypoxic conditions. HIF expression and transcriptional activity are regulated by the oxygen-sensitive prolyl hydroxylases (PHD1–3), but the role of PHDs in neutrophil survival is unclear. We examined PHD expression in human neutrophils and found that PHD3 was strongly induced in response to hypoxia and inflammatory stimuli in vitro and in vivo. Using neutrophils from mice deficient in Phd3, we demonstrated a unique role for Phd3 in prolonging neutrophil survival during hypoxia, distinct from other hypoxia-associated changes in neutrophil function and metabolic activity. Moreover, this selective defect in neutrophil survival occurred in the presence of preserved HIF transcriptional activity but was associated with upregulation of the proapoptotic mediator Siva1 and loss of its binding target Bcl-xL. In vivo, using an acute lung injury model, we observed increased levels of neutrophil apoptosis and clearance in Phd3-deficient mice compared with WT controls. We also observed reduced neutrophilic inflammation in an acute mouse model of colitis. These data support what we believe to be a novel function for PHD3 in regulating neutrophil survival in hypoxia and may enable the development of new therapeutics for inflammatory disease.

PHD3 is upregulated in human neutrophils in response to hypoxia and proinflammatory stimuli. 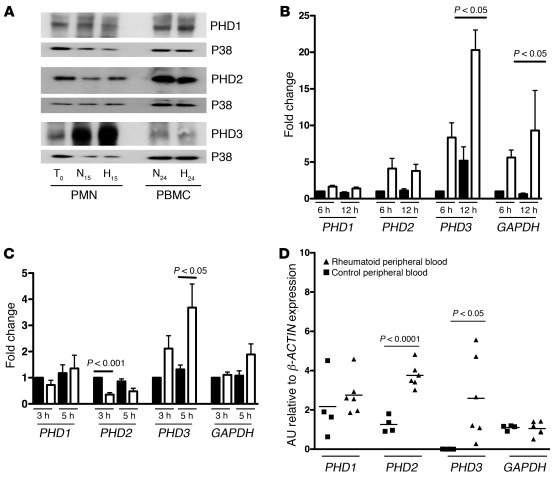